October 04, 2014
The movie Haider is based on the famous play  "Tragedy of Hamlet "by Shakespeare .Earlier Vishal Bhardwaj had taken inspiration from "Macbeth"(for Maqbool) and Othello(for Omkara) too and this one is his finishing touch to the trilogy . 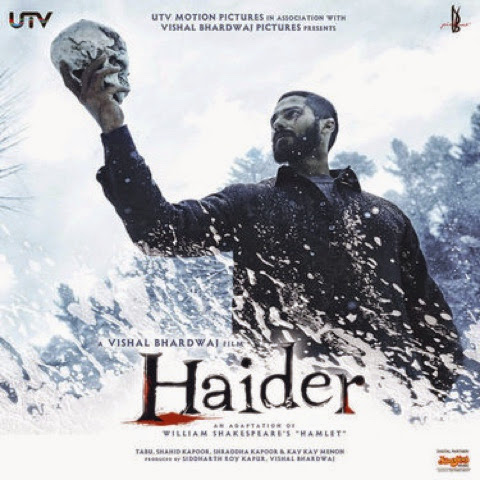 The movie starts in Srinagar ,in 1995,when militancy was at its peak .A honest surgeon Dr.Hussein Meer (Narender Jha) does not think twice before treating his patients even when the patient is a wanted terrorist.His only son Haider (Shahid Kapur) has been sent away to Aligarh for studies .His beautiful wife Ghazala  (Tabu) lives in constant terror of the army finding out about her husband helping the terrorists surreptitiously .

Her worst fears come true when an informer informs the army and her husband disappears without any clue .Haider returns back home to find his father vanished and his mother (Tabu) living with his Father's younger brother ,Khurram Meer (Kay Kay Menon).


The rest of the film traces Haider's frantic search for his father and how he exacts revenge from his Uncle and Mother for his Father's tormenting death .

The movie has some brilliant actors in the cast .Irrfan Khan as Roohdar is entertaining and amazing even if for a short role only.Ashish  Vidyarthi as Brigadier Murthy looks very polished and suave.
Other actors are Shraddha Kapoor as a journalist who is also Haider's love interest and Kulbhushan Kharbanda as a pacifist grandfather stood out .

The movie Haider without doubt is a brilliant film scripted by Vishal bhardwaj in collaboration with Journalist (and author of Curfewed Nights) Basharat Peer .I was numbed with pain for quite a few hours after watching this movie .Maybe it was just me ...

It took so many hours for me to be able to recollect myself and start feeling something and then give words to my feelings .How does one describe the stoic suffering of a half widow , their grief and longing .The lost innocence of a half orphan who does not know whether his father will ever come back or not .Are they what they are or are they not?

Watch this Film for

1.The best performance of Shahid Kapur till date .His song"Bismil" is a visual treat .

2.More than 80% of the movie is shot in Kashmir and the film is able to showcase the Kashmiri people' sufferings very well .

3.For Tabu  who has done a film after a long interval and is a marvel to watch .

5.The music with prominent use of Kashmiri instruments is very powerful and lingers in the memory even after the movie ends .

6.The screenplay ,whether it was the depiction of a once lively home now in ruins or blood and smoke spattered on pristine snow ,was very well thought out .Even a Ten rupee note used in the movie is carefully chosen from that period of time .Such is the attention to detail.

7.All the characters have been made to use typical Kashmiri accents sometimes leading to funny situations(Shraddha Kapoor professing her love for Haider,"I have lov-ed you ."

8.The two Salman buffs add to comic relief in the film.

The only con I could find was that the film never talks about the hardships of the Kashmiri Pandits and the Indian Jawans posted there .But then again it is supposed to be a film and not a documentary film.

Final Verdict --I would rate this movie a. 4.75 / 5 . A quarter mark deducted for somewhat  lackadaisical  show  from Kay Kay Menon and Shahid Kapoor.