A time to break the shackles and fly


Traditionally women all over the world have been assigned the role of homemaker and caregiver .With the passage of time , woman had to fight for right to education ,right to vote (even in the liberal U.S.A.)and for equality .Still women face the same dilemma – career or home .

Today I seek inspiration from a women who has fought all odds and became what she wanted to be-a champion .A woman who first fought her family , then her tribe and later the sports federation to pursue her passion-her passion for boxing .Yes , I am talking about Mangte Chungneijang Mary Kom ,the five-time World Amateur Boxing champion, and the only woman boxer to have won a medal in each one of the six world championships! 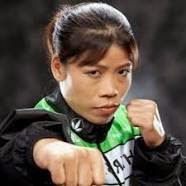 And yet this was the same  woman who was not allowed to enter the boxing ring because she was from the so called weaker sex , it was her iron will that proved to the world that she was no weakling .She was not allowed to win a competition because she hailed from a backward ,north eastern state –Manipur .Despite the “Manipuri” label she fought and fought to win , to prove her mettle .
Once married , she was again written off .Married woman are supposed to lose themselves in the pile of utensils and nappies .But Mary Kom did not deter from her chosen path .She did justice to her marriage and motherhood but never gave up on her dream of becoming the world champion of boxing .Of course her husband and coach supported her throughout ,but it was her own fight all the way from the interiors of her tribal home to the boxing arena .

Today I salute this woman , who has done India and womanfolk proud all over the world .A woman is not just a homemaker .She is Shakti (power) and Bhakti (eternal love).Mary Kom , kudos to you for not allowing yourself to be slotted and labelled ,for allowing yourself to dream and then realize those dreams through sweat and grit ,your talent and tenacity .
Atta girl ,I am proud of you !

"This post is a part of #UseYourAnd activity at BlogAdda in association with Gillette Venus".

I accept the tag from Swarna Rao .