Book Review : Ramayana - The Game of Life : The Shattered Dreams

Ever since I read the Shiva Trilogy series by Amish Tripathi(The Immortals of Melua ,The Oath of teh Vayuputras and the third book The Secret of The Nagas  ) I was awestruck by the completely different way of the presentation of  Indian mythology by the author .So when the opportunity to review a book based on another great Indian epic the Valmiki Ramayana came to me , I grabbed it with both hands .

This book has been titled ''Ramayana - The Game of Life : The Shattered Dreams' .It has been authored by Shubha Vilas who though a qualified engineer and and a lawyer ,prefers to call himself a spiritual seeker and is also a much sought after motivational speaker at institutes and universities. 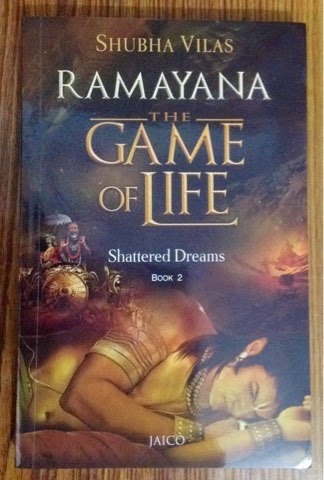 The second part of the Ramayana series ," Ramayana - The Game of Life : The Shattered Dreams " starts twelve years after the marriage of Lord Ram and Devi Sita .It starts with the plight and nightmares of King Dasaratha agonizing over the future of his Kingdom Ayodhya .

The cover illustration by Kunal kundu  depicts one of those nightmares that King Dasaratha experiences often . 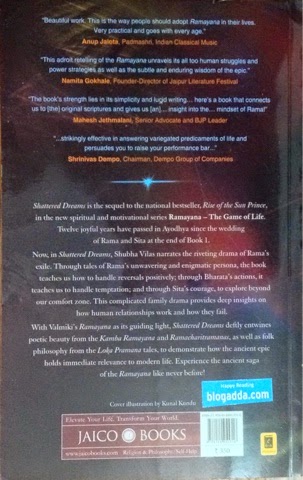 The tale unfolds the drama that starts with a tortured King Dasaratha and continues till Ram , Sita and Lakshmana reach the Dandakaranya forest to complete the fourteen years of exile as demanded by his stepmother Queen Keikeyi .

This book has a very detailed description of the characters of Ramayana , so even though we as school children had studied the Ramayana as part of our curriculum still I was amazed to find so many new stories and tales and even new dimensions to characters we already knew about like Guha the Nishada King , or Sumantra the close aide of Dasaratha and even Ravana -the demon king .So a person who has already watched Ramayana ,the television series or read other versions of this book will still find a lot to discover in this book.

Another good thing about this book is that it contains footnotes which are actually little pearls of spiritual and even practical wisdom .You can even read the book to only read theses footnotes .They are like life lessons , going into great detail about each character's emotional make up and psychology and how we can learn a few lessons from them in dealing with the adversities of our lives .
The language is easy to understand and lucid ,though at some places it gets tedious when too many adjectives are used to describe a character or its emotions .It actually feels like you are reading a religious discourse .

I was also let down by the fact that (though it is my fault for assuming ) it had no humanization of the characters , as in the Shiva trilogy ,here the characters retain their Godly aura  as they have been narrated to us through years ,but they gain a new depth and dimension through Shubh Vilas' narration.

To conclude ,this book is a good and engaging read even for persons who have already heard the tale of  Prince Ram of  Ayodhya if you can stand the slightly preachy and slow narration of the self confessed spiritual seeker . I would put this book in the category of self help books that helps in gaining insights into human behavior and improving the self there from .

This review is a part of the biggest Book Review Program for Indian Bloggers. Participate now to get free books!