November 22, 2015
“Earth has enough resources to meet people’s needs, but will never have enough to satisfy people’s greed,” said the father of our nation ,Mahatma Gandhi’.

As ultra modern living causes increased toxic emissions, rising greenhouse effects and more carbon footprints through out the world , we are forced to look at unconventional (read renewable sourcs of energy ) to tide over the energy crises without wrecking more havoc over the already burdened ecosystem .According to scientists global temperatures must stop rising soon to prevent catastrophic harm to the planet.

As the world gears up to the run up for the eleventh session of the Conference of the Parties serving as the meeting of the Parties to the Kyoto Protocol (CMP) due from 30 November to 11 December 2015, in Paris, France.

The Paris UN Climate Conference represents an historic opportunity to put the world on course to meet the climate change challenge.

All of the 190 countries participating in the COP21 talks in Paris are expected to publish Intended Nationally Determined Contributions (INDCs), which list each country’s carbon emission reduction goals. These will help hold  nations accountable to preventing global temperatures from rising by more than 2ºC.

Already , in the Intended Nationally Determined Contributions (INDCs), the Indian government has pledged to reduce carbon emissions relative to its GDP by 33% to 35% from 2005 levels by 2030 ( Associated Press). India also vowed that 40% of the country’s electricity would come from non-fossil fuel-based sources, such as wind and solar power, by 2030.

The wind program in India was initiated towards the end of the Sixth Plan in 1983-84 .

The Ministry of New and Renewable Energy has set a target of 60,000 MW capacities for the Wind Energy sector.

Wind power as an alternative to fossil fuels is

1.Plentiful - India is blessed with strong South-West summer monsoons in May-June  and its relatively weaker North Eastern winter monsoon .From March- August the whole of Indian Peninsula gets strong winds which can be harnessed for producing power .

The net effects on the environment are far less problematic than those of non-renewable power sources.

Wind farms consist of many individual wind turbines which are connected to the electric power transmission network.

Onshore wind is an inexpensive source of electricity, competitive with or in many places cheaper than coal or gas plants.

Offshore wind is steadier and stronger than on land, and offshore farms have less visual impact, but construction and maintenance costs are considerably higher. Small onshore wind farms can feed some energy into the grid or provide electricity to isolated off-grid locations.

Micro-turbines are capable of producing 300W to 1 MW and large wind turbines have typical size of 35 kW-3 MW .

Except for concern  over the noise produced by the rotor blades, aesthetic (visual) impacts, and birds and bats having been killed (avian/bat mortality) by flying into the rotors ,WInd Energy seems to be a very good alternative to meet our energy demands .Anyways most of these problems can be resolved or greatly reduced through fine tuning the technology ... 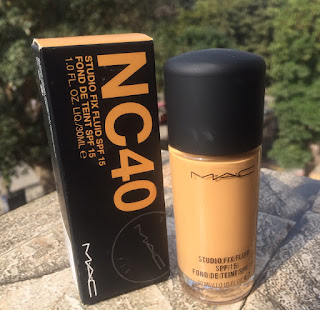 I have not been much of a make up person especially when it comes to foundations,but I am not blessed with flawless skin so it becomes a necessity when going for events and functions.I was quite satisfied with using the usual  Lakme or Maybelline Fit me range which seemed to cater to my skin tone but after a spate of acne,I felt the need for a foundation that gives better coverage and also suited my sensitive acne prone skin.
So I decided to try the much hyped MAC studio Fix Fluid foundation.
Here is my review of this product :

Presentation - In a sturdy transparent plastic bottle with a black twist on black rubber cap.No pump is given , you can purchase a separate pump, which only makes it pricier , so better to use a brush.


This foundation comes in , NC (neutral cool to cancel out the warm undertones ) and NW (Neutral Warm to add warmth to Cool undertones).

The Sales Assistant ,matched my complexion with the shade NC 40. He was also pret…
Read more