All the censor board controversy about this film only piqued everyone's interest further because of which I too just had to watch it .Of course it has a great crew to boast of which another reason was. 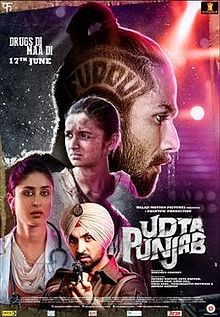 This film is a hard hitting film based on the widely prevalent drug addiction in Punjab  and I really think the director and writers have done a good job .Shahid kapoor plays a troubled and cocky singer , Tommy Singh ,who is also a hardcore drug addict .
Alia Bhatt plays the role of a migrant worker who gets trapped in the drug trade trying to make some quick bucks and the mafia is then after her.She looks quite convincing but falters in the accent department. 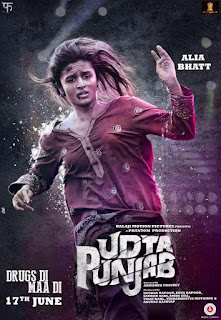 Kareena Kapoor as Dr. Preet Sahni and Diljit Dosanjh as A.S.I.Sartaj Singh ,whose younger brother was an addict too,together fight the battle which turns out to be a dark and murky business with its tentacles spread wide and deep into politics and the police department .

The film is directed by Abhishek Chaubey the same director who gave us Ishqiyan, Deh Ishqiyan ,Maqbool etc .I feel the direction could have been a little more sharper .The transformation of Shahid Kapur to a sober person seems quite easy which is generally not the case in real life .


The music by Amit trivedi  is edgy and dark and is a mix of  psychedelic trance and hip hop .The movie has earned 18 crores through its music rights only. Almost all the songs are chartbusters with great lyrics but I especially liked the Title song -Udta Punjab for its raw energy ."Chitta Ve " and "Da Da Dasse ve " are also very nice tracks .A big thumbs up to the music here .

FINAL VERDICT - A watchable film with lot of cuss words .Great music and edgy .I rate it a 4/5 .
I wonder why there was such a broo-ha-ha about it as I did not find any thing grossly objectionable for an adult audience .