Your truly was invited to a tasting session for food bloggers to United Coffee House Rewind at Malls of India in Noida to review a new cocktail and starters menu at this restaurant . 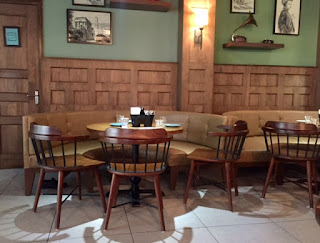 I had been to the United Coffee House at C.P., Delhi and you can easily feel the difference between the two in presentation and food.The UCF was conceptualised in 1942 and is reminder of the Raj Era .It has a regal and vintage ambience and is more in league with fine dining , the Noida outlet has a more casual and informal feel to it which is reflected even in the lighting fixtures (chandeliers in C.P. and a more urban and edgy wrought iron lights  in Noida ) and the seats (plush velvet and leather in C.P. and simple wooden chairs in Noida ). 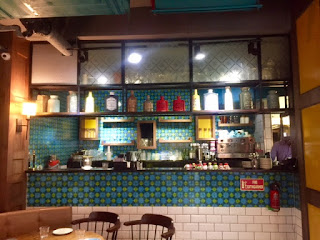 In keeping with the theme purposefully , the menu at Noida outlet has also been given a more contemporary treatment with more  fusion cuisines being introduced into the menu to cater to the young and restless generation .

Coming to the tasting session , here are the dishes and the cocktails I tried and my short review of the same ; 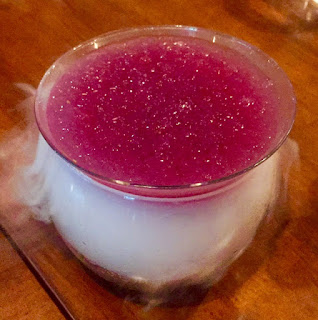 Jamunrita -Fresh Frozen black jamun extract spiked with red chilli and foggy clove smoke .This was a sweet tangy Jamun juice with just enough saltiness and chilli .It was well received by all and would be a perfect foil  for the Indian summers .Though it came with a bit of drama , with smoke/fog emanating from the bowl beneath the Jamunrita ,I still think a bit of garnish may have added more oomph ...to an otherwise perfect drink . 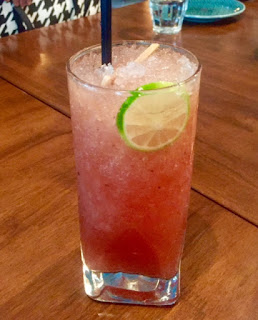 Bubbly Khatta - Imly Puree, sliced ginger with sugar syrup and soda .This was an O.K. drink .Tasted more like sugary soda with very mild hint of the sour . 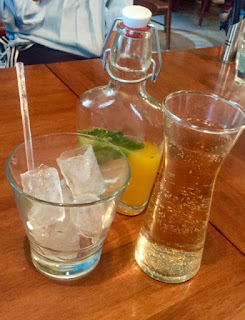 Tulsimalt - Orange nectar ,muddled with Basil leaves and passion fruit syrup , served with ginger ale and ice  .I just did not get this concoction .For one , the name Tulsimalt could put the fear of God into many what with Tulsi being a plant considered Holy by us Hindus and combining Tulsi with alcohol would be like committing  Blasphemy !
Thankfully for the religious souls , it was not the Holy Basil but the regular Basil that was added to Orange Nectar .The Ginger Ale tasted a bit like "Sprite" and I found it just about fine  maybe because I am not very fond of orange juice itself .

Because it was served in three different containers , I was half expecting some kind of a sizzle or froth (read drama ) when I went about mixing the three but I was disappointed as nothing happened .So why take the pain and why not serve them all together and save the customer the extra work ! 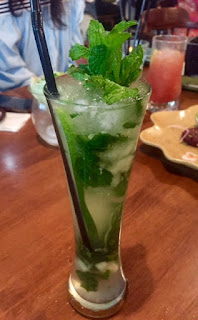 Cucumber Spitzer - Vodka, diced cucumber ,Basil and mint leaves, soda water ,crushed ice .This was quite similar to a Caprioska or Mint Mojito with the addition of cucumber in Cucumber Spritzer .
Quite good and refreshing and very well presented too .

Only Crib - with the overdose of cucumber and mint and crushed ice , there was very little to drink in the actual cocktail . 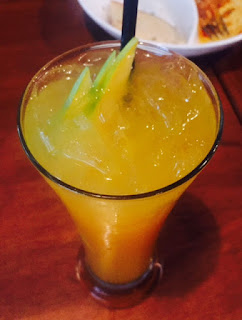 Sherlock Holmes - White rum , Malibu ,mango juice,lime juice with crushed ice .I do not know why it was called Sherlock holmes ... but this had a refreshing taste of mango juice  and coconutty Malibu .Again a great summer drink to cool off . 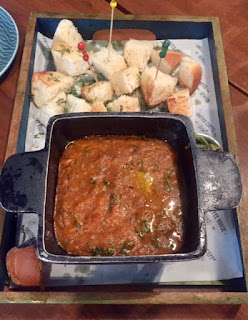 Pav Bhaji Fondue- The menu describes it as a desi taste and videshi serving style, served with maska croutons, mint relish and onions .I'd say this was the best starter amongst all the dishes served .Perfectly mashed and soft and full of flavor - this was the best Pav Bhaji I have ever had in my life and believe you me I have had at least hundreds of them so far !

The fondue would make you believe there was something cheesy about it but I guess it just meant dipping sauce or the Bhaji . 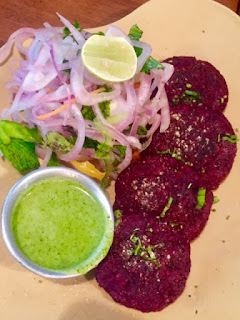 Red velvet Tikki -These were pan fried beetroot patties,infused with besan,mozzarella and served with pudina raita .The Beetroot patties were well done and melt in your mouth , something your kids should have to change the notion that beets can't be tasty ! The Pudina raita was minty , tangy ,homogeneous and the perfect accompaniment to the tikkis . 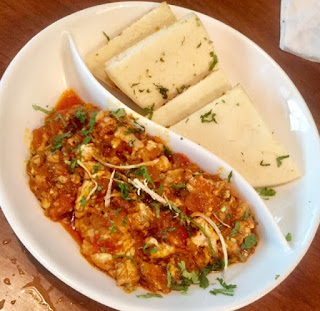 Tawa Bheja Fry - This dish comprised of sauteed brain of lamb served with khamiri roti crisps .It was an average dish and in comparison to the Pav Bhaji , the Pav Bhaji fondue came up as a winner even among the carnivores though they were quite happy with the portion size here . 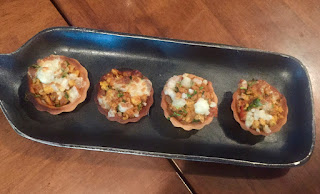 Murg Kurchan Tarts- Chicken scrapings served on tarts .The khurchan had slightly raw tomatoes and onions which was a spoiler and the slightly sweet tart base spoiled it further , If the base would have been savory I think that would have added a different dimension in terms of taste .The tarts were slightly burnt too as you can see in the picture above . 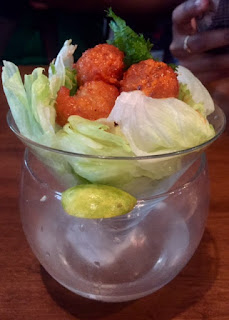 PopCorn Shrimps  Dynamites - Pieces of crispy Tempura prawns coated in spicy mayonnaise and topped with thinly sliced onions . My partner was quite happy with the prawns , well done and crisp on the outside and juicy on the inside and packed with flavour . 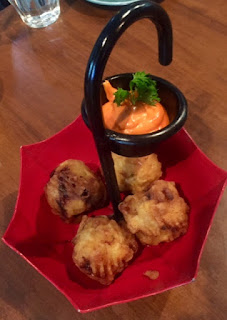 Mac and Cheese Pakora fritters - The crisp outside and slightly gooey inside fritters were served with southwest sauce .Quite good ! 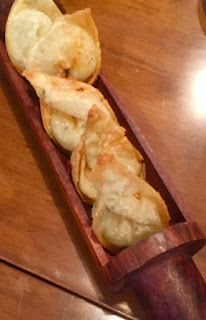 Cheese Chilli wontons - The hot and crisp wontons were served with chili plum sauce and were quite good though I prefer them hotter .

FINAL VERDICT - I rate it a 3.5 /5 . The menu was in keeping with giving the quality of UCF with a twist , it worked at some levels and failed occasionally .The taste and quality of ingredients was quite  good but the presentation could be worked upon a little more because just serving in a different style does not make fusion cuisine .


Will I go there again ? Yes ,definitely !