April 04, 2017
I had the pleasure of enjoying French hospitality and rubbing shoulders with some very well known authors in the literary world when I was invited to attend the book launch of the romantic fiction novel ‘Harp’ by entrepreneur Mr. Nidhi Dalmia by The French Ambassador to India, H.E. Alexandre Ziegler at his residence on Nyaya Marg on  28th March 2017 . 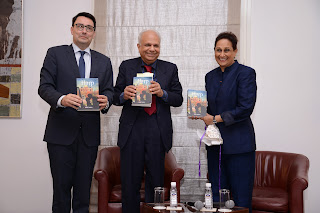 As Mr.Ziegler after launching the book ,commended Mr Nidhi Dalmia on literary effort and the evocative impressions of Paris in the book which highlighted the friendship between India and France as well as the affection and admiration of the two peoples for each other. He hoped that efforts like this will encourage more Indian students to study in France . 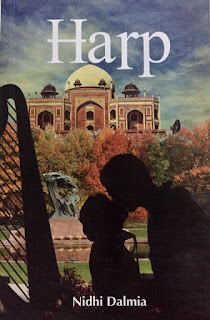 Speaking about the launch, Mr. Dalmia said, "It is truly an honor to be here and to have my book launched by H.E. Alexandre Ziegler.  Harp is a romantic novel which speaks a lot about travel, music and culture. The book is partly set in France especially Paris - The City of Love. It is fitting that it is being launched at the French Embassy Residence.”


Among those present for the launch were Manju Kapur, renowned novelist and wife of the author ,V.N. Dalmia, entrepreneur and brother of the author ,Yashodhara Dalmia, renowned art historian and sister of the author, with husband Maseeh Rahman , Upamanyu Chatterjee, renowned writer, with wife Anne Chatterjee ,Sunit Tandon, Theatre-person & ex-Director General, Indian Institute of Mass Communication and the whole Dalmia clan was in full attendance to cheer the new author .


After the introduction by the French Ambassador , it was Mr Nidhi Dalmia's turn to read out some excerpts from his book and then there was the small tete-a tete with the author and Ms Vaiju Naravane .

Vaiju Naravane was The Hindu’s Senior Europe Correspondent based in Paris for 20 years. Ms Navarane is also the Foreign Fiction Editor with the French publishing house Albin Michel, where she has published authors like Vikram Seth, Anita Nair and Anita Brookner, among others.She currently teaches journalism and media studies at Ashoka University in Haryana .

In conversation with Vaiju Naravane , Mr. Nidhi Dalmia said he had always been ardently inclined towards writing, but his professional commitments did not earlier allow him to indulge his passion.His love for Paris was effusive as he broke into one of his favourite favourite French songs after being asked about his experience in Paris .


The launch was followed by a cocktail reception in the bedecked lawns.  As glasses clinked and people celebrated the launch with champagne and Bordeaux wine, French and Indian snacks, discussions revolved around the book, Indo-French relations, the upcoming elections in France and Delhi’s last few days of Spring.


The Book Review of "Harp "

Harp is the story of love and longing .The hero of the story is a young man  Ashok, who belongs to an industrialist family background, he embarks on a journey wanting to learn more about dairy production , their field of business . His quest takes him  through India, Europe and USA  where he meets an attractive and lively musician Lauren and falls in love with her.

Lauren is a young Polish woman who has a calling to music and the Harp .She is in love with Ashok and yet deeply rooted to her European heritage and torn between Ashok and her love for music .Meanwhile Ashok too is torn between his duty to his family but the oppressive Indian bureaucracy and his desire for Lauren keeps egging him to leave Indian shores and settle with Lauren .Lauren wants to move out of her oppressive communist country and chart a future in Europe .Of course there is the huge cultural difference too , they cannot make a commitment to each other as they are still unsure of their future together but keep in touch nevertheless .Meanwhile the attractive Lauren finds many suitors who try to sweep her off her feet and her parents too want her to settle with a European rather than an Indian boy .

As the story progresses,Lauren and Ashok find it difficult to keep this long distance undeclared love alive and an Indian girl named Aparna - smart , attractive and independent enters Ashok's life .

While Ashok was a well read and a lover of art ,dance ,theatre and all things fine which were resonated in Lauren's personality too , Aparna was attractive but did not share Ashok's love for the performing arts and books .Ashok's family meanwhile found it easier to accept Aparna,an Indian as their future daughter -in -law rather than a foreigner .

It does not help that Aparna too is based in California and here again distance plays a spoiler .

The book has an interesting twist at the end .

What I liked about the Book - Harp

Though the description of the book says that it is a romantic friction , I appreciated it far more as a travelogue with beautiful insights and glimpses into political state , bureaucracy and culture of the Scandinavian countries .

Our generation that has an easy access to internet and mobiles will find it very sad that in the sixties just to be able to talk to someone in another country , you had to book a trunk call and an operator would be listening in to your conversation .Phones calls did not come cheap not there was a possibility of calling someone immediately.One had to wait for hours to get connected sometimes.

The author paints such a vivid picture of the scenery of various country as Ashok sets out for his travails in foreign lands, meeting all sorts of people .

I immensely enjoyed that part of the book that described the music and culture of various european countries from Paris to Amsterdam to Warsaw etc.

The romance in the story holds the interest till the end ,you empathise with the characters and their strives .Most characters are well etched out .


What I did not like about the Book - Harp

The writer uses a lot of sanskrit ,Hindi ,French and Polish words in this and so the book has a glossary at the end to help the reader .I think those words could have been added as a footnote so that the reader is not compelled to move back and forth to look up words .

The love scenes left a lot to be desired but then we are talking of a completely different generation so I shall not bear much grudge on that count.

Otherwise a good book , wholesome and very illuminating vis-a-vis the European and Indian politics and cultural scenes in the sixties .