About the Author - Jason Kothari 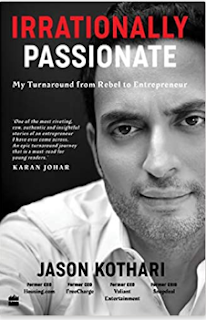 Born in Hong Kong to middle class Gujarati parents, Jason had a tough childhood that included frequent uprootment   and moving around the globe and facing cultural shocks and racism.

Jason Kothari is a graduate of The Wharton School and has been hailed as a turnaround specialist ever since he saved his childhood favorite Superhero comic book company, Valiant Entertainment, from bankruptcy and gave it a new lease of life, while still being a college student and he later sold it for a whopping $100 million!

Jason proved to the world that his was not a fluke case by repeating his success story with Housing.com, FreeCharge and Snapdeal , all of them  collapsing businesses  that were revived by him.

He soon went on to be one of the top ten highest paid executives in the world while still being in his thirties. Currently, Kothari is on the Board of Directors of  Emaar India, a subsidiary of the company that developed the landmark Burj Khalifa in Dubai.
He now resides in Mumbai, India.

About The Book - Irrationally Passionate

This book is a highly intense and personal account of his journey from being a beaten down rebel kid to a widely acclaimed entrepreneur and turnaround specialist.

The book has simple, easy to understand language, no difficult literary words or heavy quotes here, which sends across the author’s thoughts in a very lucid manner and I think that was intentional on the part of the author. Jason does not try to impress the reader with his Wharton degree or his accomplishments, but makes a sincere effort to share his story with the world and inspires others to chase their dreams. According to him, a lot of his strategy and skills developed not from what he learnt at Wharton but much earlier and from his personal experiences in life.

Autobiographies are tricky business to write when you are a celebrity. People can and do a google search on  you and already know about your story because of which there is no novelty factor in reading that  autobiography .So the trick lies in giving a new perspective or the inside story on the life events that made the man a legend and Jason succeeds at keeping the narrative interesting.
Jason Kothari succeeds in giving us a gritty and raw account of his life, struggles and challenges and how every adversity taught him a life skill and drove him to face his demons even more ferociously. He reveals how rediscovering spirituality through Jainism helped him kick his vices.

I took up this book almost expecting a Slumdog Millionaire kind of a story, but this is not really an unbelievable and magical rag to riches story.

Jason seems to have far more privileges than what a common person is born with, so that kind of takes away from the stardust. But then again, we all have some disadvantages and some privileges in life and we all get opportunities; it is what we make of them that make us who we are. It is the tough decisions and the ability to take a rejection and bounce back, that makes you a force to reckon with.
Jason makes you believe, that it is important that you have a dream and when you have the dream, you just need to keep fighting and improvising for that dream to become a reality and that never say die attitude really is the key to entrepreneurial success .He succeeds in selling the theory that it pays to be irrationally passionate in life!

A book which will probably inspire many and certainly will be a bestseller.