THIRTEEN REASONS WHY – A BOOK REVIEW 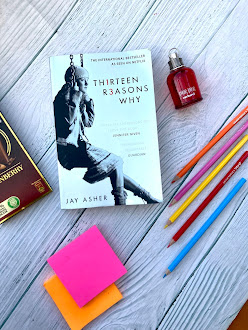 The book “Thirteen Reasons Why” gained a lot of attention when Netflix started streaming a series based on it.

I have not seen the series yet so I cannot comment on the similarities between the book and the series but let us leave that for another time and focus on the book itself for today.

It is a fast paced book that deals with coming of age, friendship and sexuality.

The opening pages announce the arrival of a mysterious box, the size of a shoebox, at Clay Jensen’s home. The sender is his classmate and crush Hannah Baker. Sadly for Clay, Hannah committed suicide just two weeks before the box arrived.

The box contains audiotapes made by Hannah and the first tape starts with Hannah explaining the “Thirteen Reasons why ” she was pushed to the brink and ended her life, Clay and his friends happen to be among the 13 reasons.

The book has a dual narrative with Clay and Hannah taking turns to narrate the story. The narration keeps going back and forth between the present and past. There are flashbacks from Hannah’s life sharing about her little joys and triumphs after shifting to a new school. While this technique of dual narrative keeps the interest alive, at one point it actually became quite confusing and I had to go over some paragraphs again and again to get a better grip of the events.

From the outside, a teenager’s life seems a life filled with endless fun and frolic with friends. But this book gives us a closer look into their world. A world where parental discords makes them insecure, the pressure of carving their own career paths, bullying from seniors, peer pressure, body shaming and  struggling to come to terms with the physical and emotional changes triggered by their raging hormones… suddenly you realize that coming of age is quite a challenge in itself.

“ Thirteen Reasons Why ” is not only an edgy thriller but also serves the purpose of sensitizing parents and the generation X to the issues of depression and suicide among youngsters. Sensitizing is half the job done when it comes to preventing suicide and self harm.

While reading this book I could not help but compare “ Thirteen Reasons Why ” by Jay Asher to  “Norwegian Wood” by Haruki Murakami. Even though both deal with suicide and young romance, the main characters in Murakami’s book are older and Murakami’s book has a romantic mellow sorrowful strain throughout the book that haunts you even after closing it. On the other hand “Thirteen Reasons Why” has adrenaline pumping suspense and deals with the much younger Hannah undergoing a constant struggle to find her feet on the slippery slope of life before finally choosing to give up.

Though it makes for interesting read as a suspense thriller , I like " THIRTEEN REASONS WHY " because it can serve as a reference point for conversation around mental health issues in teenagers.

" This post is a part of Blogchatter's initiative #CauseAChatter "

1. Mental Health Disorders in Children and How to Cope with them

4. Going Back to School - How to cope with Anxiety in children during COVID 19 Pandemic

5. Why is #COVID19 associated with so much Social Stigma ?