From Smelly Home to a Smiling Home

June 19, 2015
Mrs. Sharma was very excited .She was going to visit her only son ,Rahul  who lived and worked in gurgaon .Actually her best friend Mrs. Verma had suggested a marriage proposal for Rahul and the girl and her family were coming to visit and meet Rahul and his family in Gurgaon.Everything seemed perfect and Mrs Sharma felt that the match would definitely click .She had seen the photographs of the girl and already liked her .It was Saturday today and Rahul should be home and this should give her enough time to prepare for the girl's family's visit which was due  on Sunday .

Mrs. Sharma pressed the call bell and waited with a wide smile plastered on her wrinkled face. After waiting for about 2-3 minutes she again pressed the bell , but there was no response from inside .Worried she called her son on his cellphone to check about his well being .He said he was very much all right and inside the house and was coming to open the door .

The wide smile of anticipation vanished from Mrs. Sharma's face when she saw Rahul .It was almost noon and an unshaved,unwashed,bed raggled Rahul,still in his shorts and vest ,was squinting at her through half closed eyes . Her affection turned to dismay , she pushed past him into the house and was assaulted by stenches of myriad kinds .

"What happened here , Rahul ?The whole house is upside down ...and what is this intolerable smell ?", asked  the bewildered mother .

Rahul sheepishly told her that he had a party on Friday night and what she was smelling was probably left over pizza  and drinks .Some of which still lay in cardbard boxes on the sofa and the carpet .

"This boy will never grow up ,"muttered Mrs Sharma as she tucked the pallu of her sari into her waist and set to the task of cleaning up the house .

She picked up the soggy food cartons reeking of cheese and beer cans and threw them in the dustbin .Cleaned up the kitchen cabinets and platform to a shine .The kitchen sink was clogged up and emitting a sewer like smell .She declogged the sink and kitchen pipes and switched on the exhaust fan to let out the foul air from the kitchen .

She still could smell something offensive and as she sniffed around the house like a sniffer dog to detect the source of the offensive smell , her ears pricked up when she came across the culprits .Soiled socks and unwashed clothes lay in a jumble on the washing machine .With a disapproving look towards Rahul who had by now started to help her out in cleaning , she set the washing machine and also threw in his bedsheets and pillow covers too which had that typical musty-mouldy smell that is common in hot and humid weather and for good measure she added a a few caps of dettol to the wash load to get rid of the smells .

After cleaning and flushing the stinking commode .She trained her guns at the refrigerator , armed with a white vinegar solution and a kitchen wipe .

The house looked far more presentable now .As a punishment she made Rahul mop the floors with lots of phenyl added to the mopping water to get rid of all the bachelorly smells in the house .

That night she was dog tired and slept well .

The next morning was another day packed with a flurry of activities .The girl's parents were expected anytime .She made the maid clean and go over each nook and cranny of the house and was ashamed to find a lot of garbage still evolving despite her herculean efforts last evening .

She sat down disappointed with herself .The state of a house tells a lot about the woman in charge of the house and the people inhabiting .Today Mrs Sharma felt she could not look the girl's mother in the eye because despite her best efforts the house still told a story of neglect because of the lingering smells .She could almost see the disdain in the girl's mother's eyes for her and her son . Today girls are very smart , they manage the home and office both and so they demand a partner who could also do the same .A partner who could also take good care of the house when needed .This her son could not .  .Alas ! Rahul was a good boy but no homemaker .

Mrs. Sharma rubbed her forehead out of worry and felt the  start of a headache coming .

The experienced maid looked at her and in half broken hindi asked her if something was bothering her .

"These smells ! These smells are giving me a headache and probably tody my head will also hang in shame because of these cursed smells ,Shanta !",she ranted miserably .

Shanta vanished for a few minutes and came back with armed with a can of Ambi Pur Air Effects.As Shanta sprayed the house with the ease of a daft warrior , the house was transformed from a dull, reeking musty place to a home filled with the welcoming notes of fresh flowers and spring  in the air .

"Aajkal issi ka zamana hai  (nowadays this one is in vogue ) !" Shanta explained to the bewildered Mrs . Sharma .

A triumphant Mrs. Sharma suddenly felt the gloom and the headache vanishing away with the odours .She gave Shanta a grateful smile and started preparing for receiving her future daughter -in- law and her family . 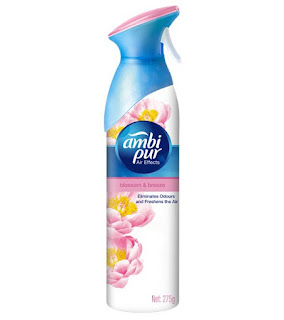 “I am blogging for #SmellyToSmiley activity at BlogAdda.com in association with Ambi Pur ."