Recently I was invited to the launch of AnnaMaya(derived from the Hindi word Anna meaning food and Maya meaning magic ) Food Hall at Hotel Andaz , Aerocity ,Delhi  for the experience  of their Indian influenced European Food Hall .It is located very close to the Aerocity Metro station and is well connected and easily approachable .

Quite noticeable were the special cute Red Ambassador cars being used as taxis for their pick and drop service which would be a vintage experience in itself !

THE CONCEPT - The concept  behind the place AnnaMaya is "Eat Mindful ,Shop Artisanal and Raise Awareness ".

The word "Artisanal" is described by the dictionary as pertaining to a high-quality or distinctive product made in small quantities, usually by hand or using traditional methods like artisanal cheese etc.AnnaMaya exhibits for sale artisanal food products like honey ,sauces ,spices etc. and thus you eat fresh and organic as well as help those artisans involved in the production of these products too !
I could see that the concept was quite popular with the foreign guests .


AMBIENCE - As one enters , one is greeted with young and energetic staff dressed in blue denim aprons over blue jeans and white  shirts .I am mentioning the uniforms because the casual yet crisp clothing coupled with the bicycle cart full of fruits immediately takes the mind to a farmer’s fair kind of things.Here too the produce and ingredients are all showcased in big open trays and you can choose your fruits and veggies and get them done as per your liking in front of you .

MENU -    They have  a regular menu and also the daily specials on offer .The food can be had at the hall and they also offer take away .

The chef here is a stickler for his recipe .so if by any chance any of the ingredient for a particular dish Is not available in its fresh state, they do not improvise on the dish to serve it instead the staff politely just apologizes for the inability to serve that dish!


The place is spacious and airy with high ceilings and sunshine trickles in through a wall of colored glass. They have open live kitchens which I personally like a lot .I was seated near the Indian Kitchen which had three tandoors -one for vegetarian grilling, another for non-vegetarian cooking and the third for the Indian breads.
They also have a baking area where they proudly displayed their world class Tom Chandley Oven .


FOOD -   For starters, I chose broccoli pakoras( Broccoli florets fried to a golden crunch in ajwain batter) with Peach lemonade which also had lime and lavender essence added to give it a complex taste.

The lassis are as good and robust as you would get them in Punjab and I really loved the coconut Lassi .They are neither too sweet nor too cold, and just creamy, frothy and lightly flavored enough to quench and refresh .
SALADS - Out of the salads on offer, I choose The Aloe Vera salad that had pieces of fresh Aloe vera ,cherry tomatoes and lettuce on freshly grilled rye bread and topped with microgreens from their greenhouse . I grated some Pink salt that was placed at my table and the whole thing tasted even better.

It was quite good because of the freshness of the ingredients and of course a very healthy choice for the health conscious.

I was also served a burrata ( a type of cheese ) ,lime and honey , fire roast tomatoes with basil naan which I found too bland except for the basil naan which was perfectly flavored and well done .


In the fluids section, I also tried their Watermelon, pink peppercorn and lime lemonade which was extra refreshing because of the pink peppercorn adding that crunch and flavor to every sip. 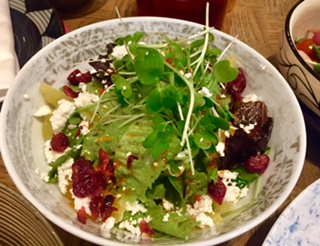 The second salad which was my favourite was –Sweet lime salad with goat cheese and shredded pickled red cabbage .It was tangy and sweet and the creamy but light goat cheese was just the right combination to have with it .
Meanwhile my fellow carnivorous friends were very happy with their lamb and spinach patties . 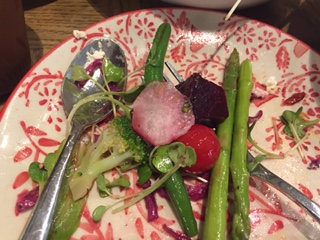 The Third Salad (yes, I am a salads person !) that I had was Tossed young garden vegetables (carrots ,string beans, French beans ,radish ,turnips and cherry tomatoes )with Himalayan black salt and lime..All the vegetables including the beans were garden fresh crunchy and tasteful.

For the main course I had Dal Chana tadka with veg Biryani and Naans.The Chana Dal was soft and well done and soft ,neither too spicy nor too hot (keeping the European theme in mind ) and I really liked it .The veg biryani was as good as it can be but nothing that I could go gaga over . 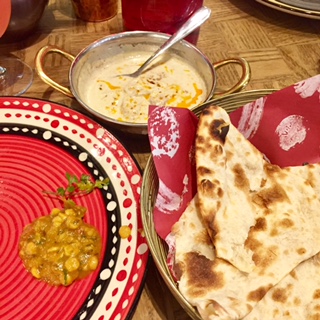 I also had the Amritasari PaneerTikka and even though the Paneer Tikka was done to perfection, the foodie in me was not satisfied with the flavors especially the mind chutney that accompanied it lacked that punch. 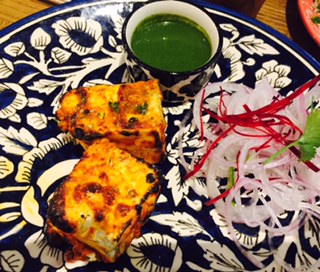 Another winner on the vegetarian menu was the lotus stem curry which was rich, mild and tangy and the lotus stem was unexpectedly soft. A sure winner ! 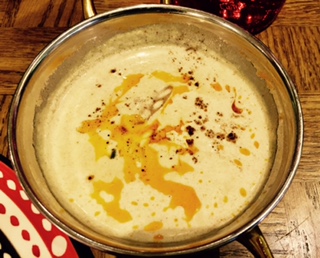 A word for the non vegetarian friends , If I were to go by the ooh and aahs of my fellow non vegetarian diners , then the Tandoor smoked masala lamb chops with chilli and mace and  tangy tamarind chutney and Kashmiri rogan josh in fragrant spices with butter naan were quite good . 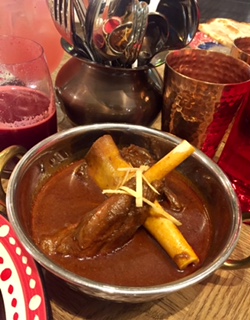 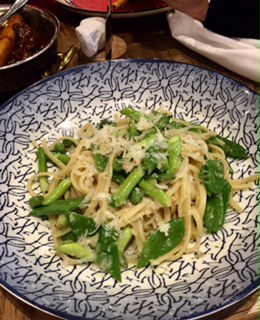 DESSERTS - The Chef Alexander Moser had us spoilt for choice when it came to desserts .We were presented three desserts which were quite complex and not on the menu as such .It would be difficult for me to name them as they were not on the main menu and the Pastry Chef kind of magically made them appear from behind the dessert counter and presented them with almost a flourish .But I shall try to name few of the ingredients I could make out . 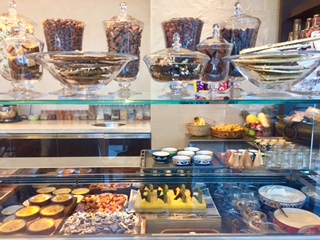 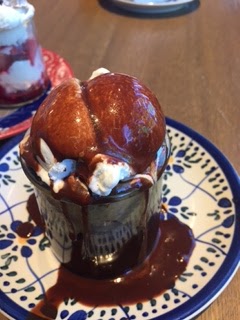 There was also a passion fruit and strawberry coulis and some more chocolate to indulge in ... But the end result was a very satisfied moi ! 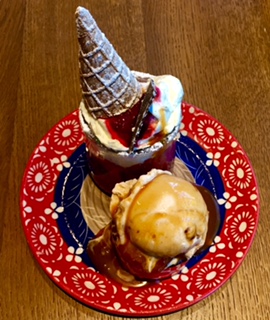 Before leaving I was presented with a few artisans from the AnnaMaya Food Hall and I am showing them here to give you an idea of the kind of things you might get your hands on over there .
My kids loved their Plum chutney , Mashobra honey and I was quite happy with the Chili oil and Bhut Jolokia (the hottest chilli in the world ) sauce .

FINAL VERDICT - It is great place for food and for travellers with a conscience who want to do their bit for the fast vanishing tribes of artisans .The food is one of the most organic and freshest I have had,cooked in an Indian way and yet is far removed from the oil topped spice laden food we pass off as Indian food.It has mostly mughlai food on offer but their european food is simply too good too and did I forget to mention the huge variety of desserts !