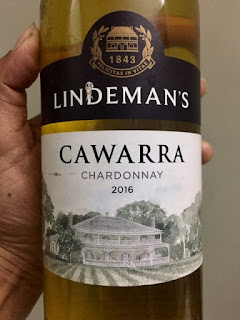 I am back with another wine review and the object of my attention this time is an  Australian White Wine - The  Lindeman's Cawarra Chardonnay 2016. 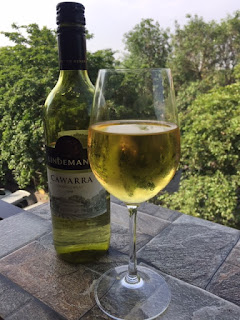 
Lindeman's Wines were established by another doctor and wine aficionado like me ( Ahem...)  Dr. Henry Lindeman of  England.He discovered wine making during his travels through Europe in 1830s. He later migrated to Australia and  started vine planting in the rich soils of Cawarra , Hunter Valley in 1843.  By the way Cawarra  means besides running water in the aboriginal tongue. Lindeman's wines earned a name for themselves when they received international acclaim for  their Linderman's Hunter River Burgundy Bin 3100 and  Linderman's Hunter River Burgundy Bin 3110 Chardonnay.

Vintage - 2016
Alcohol - 13%
Style - Dry
Colour - A glorious golden yellow that was so captivating on first sight that I almost forgot to take down the notes and just wanted to keep sipping on ! 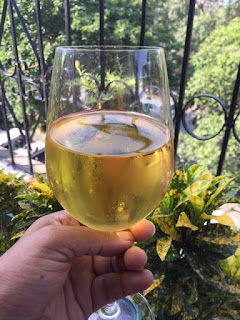 Nose - The nose opened with quite a bit of the rock melon, it also had strong tropical fruits dominated by yellow stone fruits, lot of peach and pineapple.

Palate - This wine had a medium body that made its presence felt like a dainty dancer,light on her feet and yet captivates you with her performance .Bold peach and golden apples in every sip with might be a hint of pineapple.

Medium acidity and a rather long rounded finish with negligible oaky notes.


The #Lindeman’s #Cawarra #Chardonnay is an easy going fruity, dry,white wine and would be just perfect for picnics !

Food Pairing - I found it a very versatile wine that as per the book goes well with  seafood, chicken, veal and pasta but I feel this would also go very well with most Indian dishes specially chicken and fish as long as they are not very sour or very spicy.