PALM OIL AND ITS MANY BENEFITS

December 15, 2019
There was a time we Indians used natively grown Mustard Oil ,Ground nut Oil ,Coconut and Palm Oil for most of our cooking needs , but this changed gradually and now the market is seeing a predominance of Sunflower oil ,Soy Bean and palm oil because of a lot of factors coming into play mainly inadequate production that fails to meet the burgeoning demands of our exploding population.

The focus of this article is Palm Oil because this is the cheapest Oil available in the market.Even though it is cheap , it has been hit by controversies some of them now proven baseless.

WHAT IS PALM OIL AND WHAT ARE ITS USES


Palm oil comes from the fleshy fruit of oil palms (Elaeis guineensis ).The palm fruit yields two types of oil, one from the fruit and other from the nutty kernel. Both have different nutritional characteristics.The Palm oil that comes from the palm fruit, is completely cholesterol free. Moreover it has a saturated fat content of 50% as compared to coconut oil which has 85% so it is healthier than coconut oil.

Unrefined palm oil is sometimes referred to as red palm oil because of its reddish-orange color.
Malaysia is the largest producer of Palm oil.

Because of its low price,easy availability,staying semi-solid at room temperature and stability at high temperatures - it is widely used in the food industry in breakfast cereals ,baked goods like bread, cookies and muffins,Protein bars and diet bars,Chocolate,Coffee creamers and Margarine.

Palm oil is also used in the cosmetics industry in making lipsticks,Cold creams,conditioners etc.
It has in the last few decades been used as a Bio-fuel too.

WHAT ARE THE CONTROVERSIES AROUND PALM OIL USAGE ?

1.Pam oil has about 50% Saturated fatty acids (Palmitic acid) because of which  palm oil was considered bad for the heart till few years back.But recent studies have shown that Palm Oil is actually healthy as besides the saturated fats it is rich in heart healthy unsaturated fats too thus making it a a healthy cooking medium.


2.The Palm oil plantations, typically mono culture crops are under increasing scrutiny for their effects on the environment, including loss of carbon-sequestering, bio diverse forest land.There is also concern over displacement and disruption of human and animal populations due to palm oil cultivation.

Developing nations like India and Malaysia need to ask why the onus of conservation has to be on the developing countries only at the cost of their economies ?
While developed countries freely lap up the cheap palm oil in the processed food markets, they decry its use as unhealthy for cooking and the sunflower and canola and corn oil grown by developed countries is promoted as the healthiest alternative even though these oils use far more land and water resources and give a much lower yield!
While Amazon forests in developed countries get burnt in perpetrated fires,developing countries are asked to not use cash crops because it causes deforestation.

WHY SWITCH TO PALM OIL ?

1.It is a cheaper option. India relies on Oil imports to meet most of its Edible Oil requirements and with domestic production stagnating and demand exceeding far more than supply, edible oil is getting more and more expensive. Hence this is a time we should look for cheaper alternatives in the Edible Oil Market.

2.It is healthy ,as new studies indicate -palm oil consumption is not linked to heart disease because besides the 50%  saturated fat (which is considered bad for the heart ) palm oil also contains about 50% unsaturated acids –Oleic acid and Linoleic acid -which are good for the heart and thus it is an overall healthy medium for cooking. 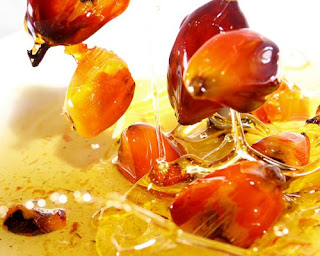 3.Most vegetable oils are deficient in Vitamin A but unrefined Palm oil is a very rich source of Vitamin A (500-700mg/Litre) unlike other vegetables and been linked to several health benefits, including protecting brain function, reducing heart disease risk factors and improving vitamin A status.

4.Palm Oil is a basic source of income for many farmers in South East Asia with an estimated 1.5 million small farmers growing the crop in Indonesia and more than 500,000 people in Malaysia  are directly employed in the palm oil sector and the sectors connected with related industries. Thus Palm Oil cultivation has improved the educational and financial status of the small farmers and general population.

5.In the year 2008, palm oil that meets RSPO introduced standards was introduced which designated "certified sustainable palm oil" (CSPO).That means this Palm Oil has been responsibly grown and is not going to cause any harm to the environment and sustainability.
Look for it on the label.

6.Oil palm producers are eligible to take part in Clean Development Mechanism (CDM) programs in which developed nations invest in clean energy projects in developing nations to earn carbon credits to offset their own greenhouse gas emissions and to reduce greenhouse gas emissions worldwide. Thus carbon sinks are created in developing countries to offset the carbon footprints of the developed nations helping in maintain the ecological balance - it is like the developing nations are doing the dirty laundry of the developed nations for a price!
7. As the above illustration shows , Palm oil is one of the most sustainable options when it comes to the yield The oil palm is the most efficient oil-bearing crop in the world, requiring only 0.26 hectares of land to produce one tonne of oil while soybean, sunflower and rapeseed require 2.22, 2 and 1.52 hectares, respectively, to produce the same. Every Oil Palm also has a life span of 20-30 years during which it continually keeps giving yield unlike other oil plants.

8. As a foodie,I love the taste of unrefined Palm oil – it has a nutty earthy taste which is great for baking and salad dressings .Also the high carotene (the anti-ageing vitamin) is great for my Vegetarian diet.

Have you tried Palm Oil yet ?